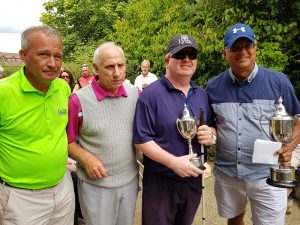 EIC are proud to provide guide Ray Jobsz to the English and Wales Blind Golf Tournament this week. Ray (who has never played Golf!!!) has been assisting Roger who began to go blind at the age of 29 for the last 18 months. Roger sight loss has been gradual over the last 25 years and he has never lost his desire to play Golf. Regular practice sessions at Nazeing Golf Club and practice rounds with Ray, have meant they have built up a good understanding.

Ray Jobsz said” i am flabbergasted ….Roger has been steadily improving over the last 6 months and as a guide who knows nothing about Golf just concentrated on his angles and posture. (as well as looking for balls!), but never expected to win!

As guides we have to do more than just guide on the day, we also have to get them there and organise their rooms, get them to dinner toilets etc. It can be demanding but it is for sure rewarding!. Many of the blind have little to look forward to so getting them out and giving carers a break is great all round. Being with such a great bunch of people is a privilege. I am glad EIC can offer this support and thank my staff for covering for me on these tournament weeks.”